Wikipedia says (alongside a stunning photo):

Amegilla bombiformis, commonly known as the Teddy Bear Bee or Golden haired mortar bee, is an Australian native bee in the family Apidae. 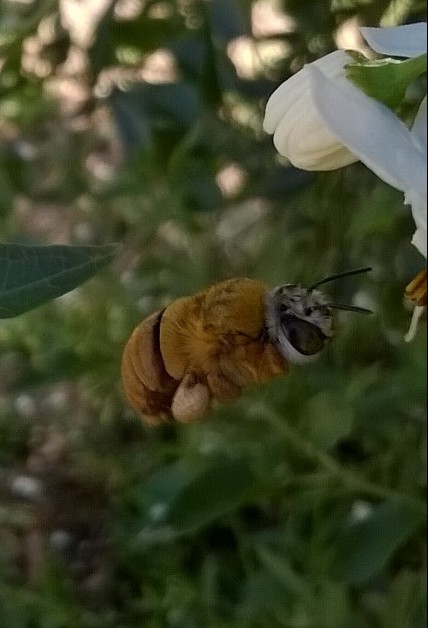 LEFT: I’ve had two of these bees visiting my fake jasmine creeper for most of the week. When I first saw them I couldn’t believe my eyes – thinking they were European bumblebees. I was searching my conscience to see how I felt about failing to report them to the Department of the Environment when I recalled reading about our native teddy bear bees. Foreign bumblebees are kept from mainland Australia to keep our many smaller native bees safe. Our island State, Tasmania, hosts the pretty European.

On that first day,I followed my visitors around and around the jasmine for an hour without getting a single clear image, and if you look at the first You Tube video below from Aussie Bees you’ll see why. They just will not keep still long enough!

Aussie Bees is a handy site for bee identification.

RIGHT: They have this weird habit of flying all bunched up like a ball, but sometimes they leave some legs hanging (that pale loop out front is a vine on the jasmine).

From the stripes, both the black ones and the hairless, I decided that they are the teddy bear bee, despite the whitish head. Perhaps they have been breeding with their close cousin, the blue-banded bee.

BELOW: A few of the the blue-banded ones are here, too, looking terrific when the blue glints in the sun! Again, so hard to catch them still long enough to photograph. They are smaller than the teddy bear, but still a very large bee.  You can just see the bluish tint in the image … just! 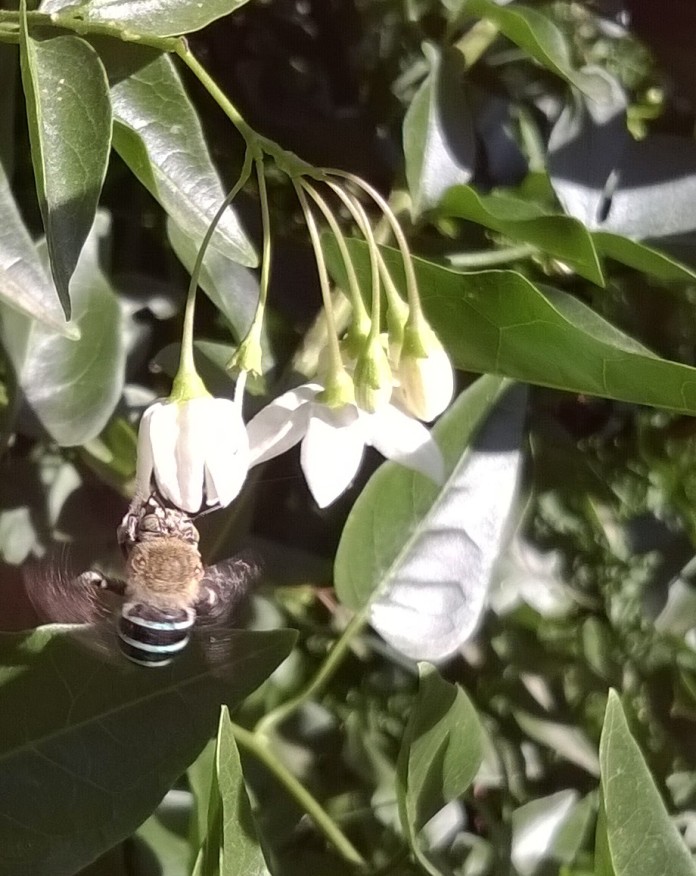 And another fascinating video from Aussie Bees.

I found that they sleep clustering on stems, holding on with their jaws, fascinating.