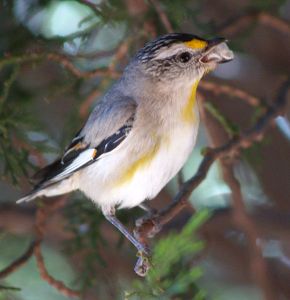 1. The little pardalotes are back.

The striated pardalote (Pardalotus striatus) is the least colourful and most common of the four pardalote species. Other common names include pickwick, wittachew and chip-chip. It is a very small, short-tailed bird that is more often heard than seen, foraging noisily for lerps and other small creatures in the treetops.

2. Even though the Willy Wagtail is a very common bird here, I don’t notice it all that much in our yard. Lately it has been very cheeky and flying close to us ( the dog and I).

The willie (or willy) wagtail (Rhipidura leucophrys) is a passerine bird native to Australia, New Guinea, the Solomon Islands, the Bismarck Archipelago, and Eastern Indonesia. It is a common and familiar bird throughout much of its range, living in most habitats apart from thick forest. Measuring 19–21.5 cm (7 1⁄2–8 1⁄2 in) in length, the willie wagtail is contrastingly coloured with almost entirely black upperparts and white underparts; the male and female have similar plumage.

Three subspecies are recognised; Rhipidura leucophrys leucophrys from central and southern Australia, the smaller R. l. picata from northern Australia, and the larger R. l. melaleuca from New Guinea and islands in its vicinity. It is unrelated to the true wagtails of the genus Motacilla; it is a member of the fantail genus Rhipidura and is a part of a “core corvine” group that includes true crows and ravens, drongos and birds of paradise. Within this group, fantails are placed in the family Dicruridae, although some authorities consider them distinct enough to warrant their own small family, Rhipiduridae.

The willie wagtail is insectivorous and spends much time chasing prey in open habitat. Its common name is derived from its habit of wagging its tail horizontally when foraging on the ground. Aggressive and territorial, the willie wagtail will often harass much larger birds such as the laughing kookaburra and wedge-tailed eagle. It has responded well to human alteration of the landscape and is a common sight in urban lawns, parks, and gardens. It was widely featured in Aboriginal folklore around the country as either a bringer of bad news or a stealer of secrets.

3. I had a second walk this afternoon, and on the way back a Willy Wagtail, a Striated Pardalote AND a Flame Robin, lined up on the fence in front of me – all in a row with about five or six feet between them! Even if I had the phone camera with me, it couldn’t do the birds justice – so the images are as cited.

The flame robin (Petroica phoenicea) is a small passerine bird native to Australia. It is a moderately common resident of the coolest parts of south-eastern Australia, including Tasmania. Like the other two red-breasted Petroica robins—the scarlet robin and the red-capped robin—it is often simply called the robin redbreast. Like many brightly coloured robins of the Petroicidae, it is sexually dimorphic. Measuring 12–14 cm (4.7–5.5 in) long, the flame robin has dark brown eyes and a small thin black bill. The male has a brilliant orange-red chest and throat, and a white patch on the forehead above the bill. Its upper parts are iron-grey with white bars, and its tail black with white tips. The female is a nondescript grey-brown. Its song has been described as the most musical of its genus.

Todays extra walk was brought on by my latest very determined effort to lose some weight – and hopefully gain some extra years of life. I’m now the proud owner of a Vivofit band (plus a heart rate monitor).

Does anyone else have one of these particular activity trackers?

I LOVE it.  I’m a bit annoyed that gentle strolling about will not get rid of the red line which tells me I have been inactive too long. Vika was happy to have the extra time out of the yard today. I’ve still got 1290 steps to do   today out of the assigned goal by Garmin Connect. I’m keeping track of calories on myfitnesspal, and it syncs with Garmin. Today was my first food entry and it said that if I kept my food intake at the same level, it will only take 5 weeks to get down to my goal: 63 kgs.  😮  LOL. I wish.

I’m going to take my real camera on my walk tomorrow. And hope for sunshine.

Lerps? Wikipedia says… “In biology, a lerp is a structure of crystallized honeydew produced by larvae of psyllid insects as a protective cover. These insects are commonly referred to as lerp insects.”

Learn something every day!