After  seeing Claudette’s echidna photos (which I missed when she posted them back in October), I decided to pluck out these echidna shots from an old album. Luckily I picked out the right one right away – else I would still be tripping down memory lane!

What’s that it the paddock?

I was married to Mr X then. The window over my kitchen sink looked out across our farm – that strip of green is on the neighbour’s stud cattle property. We ran sheep, for both fat lambs and wool.  I recall seeing the ‘black thing’ ambling across the paddock. As soon as I worked out it was an echidna (or hedgehog as what I grew up calling them), I rushed for the camera. 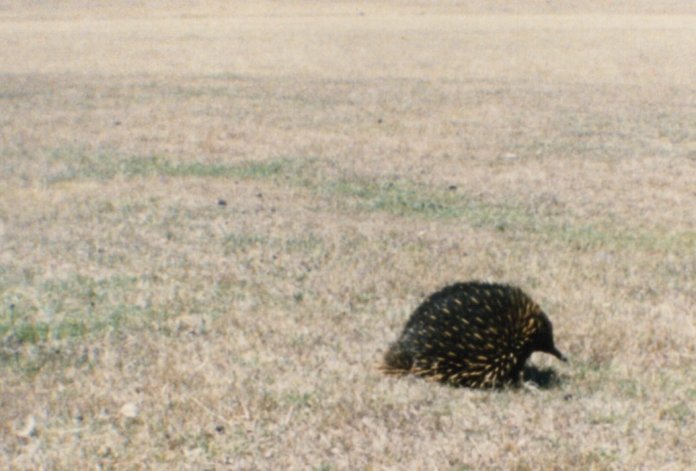 I have no idea what camera I used. It was about 1988, and I don’t think I was up to Time Magazine’s FC-100. Whatever I used before then used a film cartridge. Gee, I love digital so much.

One last photo before it reached the shade

I hope you enjoyed another look at an Echidna.  By the way, like our platypus, the echidna is an egg-laying mammal called a monotreme.  Any resemblance to the hedgehog is only superficial. If you wish to know more about their oddities, then check out the article on Wikipedia.   🙂