Hello people, we’ve been interstate to my mum’s place again. If you recall, last November we spent the visit unpacking mum’s moving boxes. This time I hung her picture collection. Mum is thrilled to have her ‘gallery’ around her again after 10 months of being packed away.

Coming home on Sunday, we had lunch at St Arnaud. I always associate the place with horses as my dad used to go to races there when I was a kid. It was built on the back of the gold mining boom in the 1850s and still produces plenty of gold nuggets for fossickers. 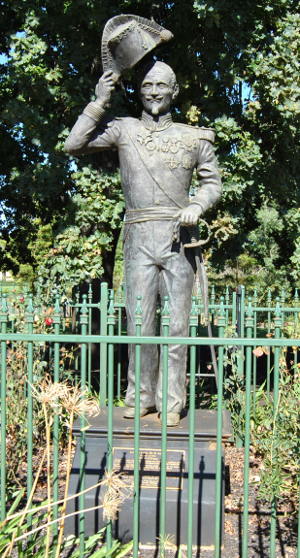 A statue dedicated to the fellow who inspired the name of the town takes centre stage in a pretty park.

Marshal of France Armand Jacques Leroy de Saint-Arnaud (Public Domain)         Wikipedia says: He served as French Minister of War until the Crimean War when he became Commander-in-chief of the army of the East.

We were going to visit over Easter, but Mr R spotted a car he wanted to buy – which we did on Thursday. It exceeded our expectations on the home trip. I can’t see it being our last car, as there will come a day when I can’t climb into it!  Later this month, we ‘re getting a wind-down solid floor camper, so needed a proper tow vehicle.  The Triton will pull a caravan if we decide to upgrade from the trailer tent.

I keep putting off the date of my retirement … but very soon, that’s for sure. The way I feel at the moment, I’d rather it was now. I think I’m hungover from the single bottle of Chardonnay I drank over the last two nights. Had to celebrate such a flash vehicle. (It is dark blue  but looks black in shadows. )

Thanks for reading.  I do hope you had a great weekend.  🙂