I know, I know … I should be writing … but I’ve been cruising about on the web all day so far.  It began with going to My Fitness Pal after walking the dog, where I enter my daily food intentions. (I track my exercise and steps on Garmin’s site: they sync with each other.)

From this morning. I was trying to show leaves blowing in the icy wind.

One thing led to another … umm, I must have cast my eye over to the right and spotted a forum post. Before I knew it I was reading about food additives and how my asthma might well stem from such things. Until recently, I thought I had exercise-induced asthma, but is recorded as allergy-induced on my medical file. So, I’d been thinking I ought to try and find out what triggers it. I never have asthma attacks, just a bit of shortness now-and-then, and lots of coughing and throat-clearing. Except the once when I had bronchitis. Gee, that was scary. In hindsight I should have called an ambulance because by time the next morning and a doctor’s appointment came around I needed steroid injections.

The galahs obliged me with their crests up today. (image cropped a bit)

I found a grouse Australian website called Food Intolerance Network. (Naturally they wish to sell books, and dvds.)  I read with amazement how children can react adversely to additives, even leading to learning difficulties. When I really think about it, I must’ve heard of these things before, but never taken note. It mentioned how some people put themselves on a gluten-free diet, but the culprit might well be the sulphite preservatives, not gluten.

As to exercising, since I’ve gotten more serious about meeting my steps quota the weight is going down slightly. Hovering around 73.5 to 74 kg at the moment. It’s not much, but it is downwards. The most important thing is that I have felt a physical change inside myself. I think it might be the loss of internal fat, because it just feels different when I move. I can even pull in my stomach muscles now without a burning pain in my back.

I’ll leave you with this image. On Thursday, the dog and I popped off for our walk between rain showers.  Just because I didn’t have the camera, there was a black furry wallaby down in the dry creek bed by the footbridge. I couldn’t approach to get a good look at it, since I would’ve feel bad if it rushed off onto the nearby busy road. I think it was a swamp wallaby. Even though they are nocturnal, they don’t seem to mind coming out on sunless days. I think they must get their timing confused. 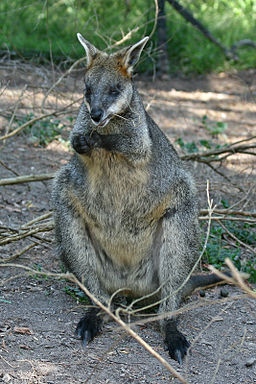 The swamp wallaby (Wallabia bicolor) is a small macropod marsupial of eastern Australia.[3] This wallaby is also commonly known as the black wallaby, with other names including black-tailed wallaby, fern wallaby, black pademelon, stinker (in Queensland), and black stinker (in New South Wales). The swamp wallaby is the only living member of the genus Wallabi.

The swamp wallaby is found from the northernmost areas of Cape York in Queensland, down the entire east coast and around to south-western Victoria. It was formerly found through to south-eastern South Australia, but is now rare or absent from that region.

It inhabits thick undergrowth in forests and woodlands, or shelter during the day in thick grass or ferns, emerging at night to feed…

Right, I’ll go make a coffee and get stuck into this first draft rewrite. I’ll get a couple of hours in before I go and make my additive-laden pepperoni pizza.

I hope you all have a lovely week-end.

20 thoughts on “About birds, additives, and a swamp wallaby …”